Control Anything from Anywhere

The VegeHub WiFi Control Hub allows you to control a powerful 16A 250V relay with local sensor inputs, or from a settable web address. It can control water pumps, sprinkler systems, alarms, lights, heaters, fans and valves.

The VegeHub makes it easy to connect sensors to the Internet. View your sensor data from any web browser on your phone or your computer. Get text messages and emails from sensor triggers. It allows you to post data to common sensor data web sites, such as VegeCloud.com and ThingSpeak.

Relay Board for 24VAC Sprinkler Systems

This board is perfect for controlling traditional sprinkler valves or other AC loads such as low power pumps. It interfaces directly to Vegetronix soil moisture sensors. It can be wired in series to valves and block watering events from a valve clock. In addition, since it is AC powered it can directly draw it's power from the clock. It has 2 LEDs to indicate that the board has power, and the on/off state of the relay. It is not recommended for DC or high power loads. 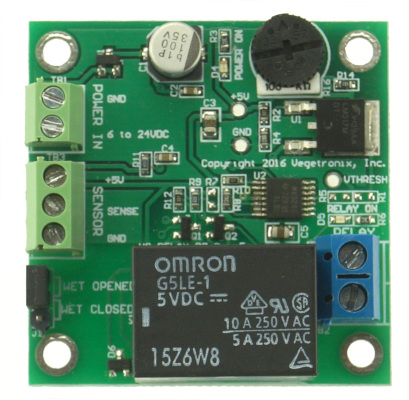 Relay Board for Switching Pumps and Valves

This board is the most general purpose relay board because it can drive either AC or DC loads up to 5A. It interfaces directly to Vegetronix soil moisture sensors. It is powered from a DC source. It has 2 LEDs to indicate that the board has power, and the on/off state of the relay. 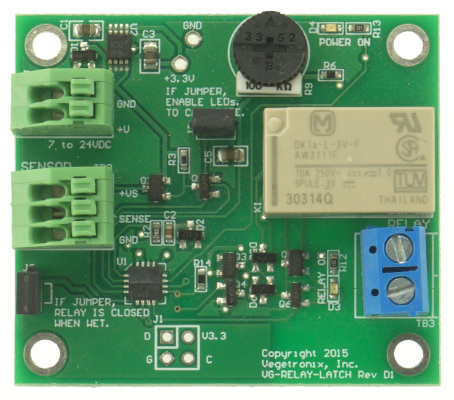 Relay Board for Switching Pumps and Valves (Battery Powered)

This board is perfect for blocking irrigation clock pulses to latching valves.

Drawing only 60uA during normal operation, this board is perfect for applications where battery life is critical. Because it uses a low power latching relay, it only requires a brief pulse of current to update the state of the relay. It has 2 LEDs to indicate that the board has power, and the on/off state of the relay. For low power mode the LEDs can be disabled with a simple jumper switch. 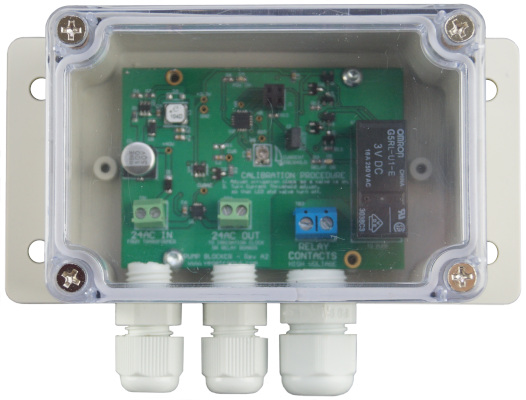 If your sprinkler system is sourced from a pump and you want to use moisture sensors with your irrigation timer, this product is for you.

The sprinkler pump blocker uses an ingenious method to determine if any of the valves in your system are engaged. It monitors the electrical current going into your sprinkler timer. When the current drops below the threshold, it will turn off the pump.

Since VH400 soil moisture probes return low voltage analog signals proportional to water content, by themselves they can't turn on alarms, or interface directly to irrigation valves. For this reason, Vegetronix offers a variety of relay boards which can be used in a multitude of control applications.

A simple jumper switch selects whether the relays closes contacts or opens contacts with moisture detection. The on/off threshold is set with a variable resistor, which is tunable with a small screw driver.

These boards are tailored for Vegetronix sensors, but can be used with any analog sensor that is powered from 5V.

The solid state relays are intended for driving AC loads only. The mechanical relay boards can drive either AC or DC loads, and require an DC power source.

The latching relay board is perfect for controlling low power latching sprinkler valves. Because it draws only a few µA, it can be run for nearly a year from a single 9V battery.

The pump blocker is different than the other 3 boards in that it is only used in situations where you want to turn on a water pump when a relay in your system is energized. In irrigation systems that use moisture sensors for each zone, the moisture sensor may turn off power to the valve, before the irrigation clock has completed the zone, and so the pump in turn needs to be turned off.